Are Whale Sharks Dangerous? How They Came to Be Known as Gentle Giants 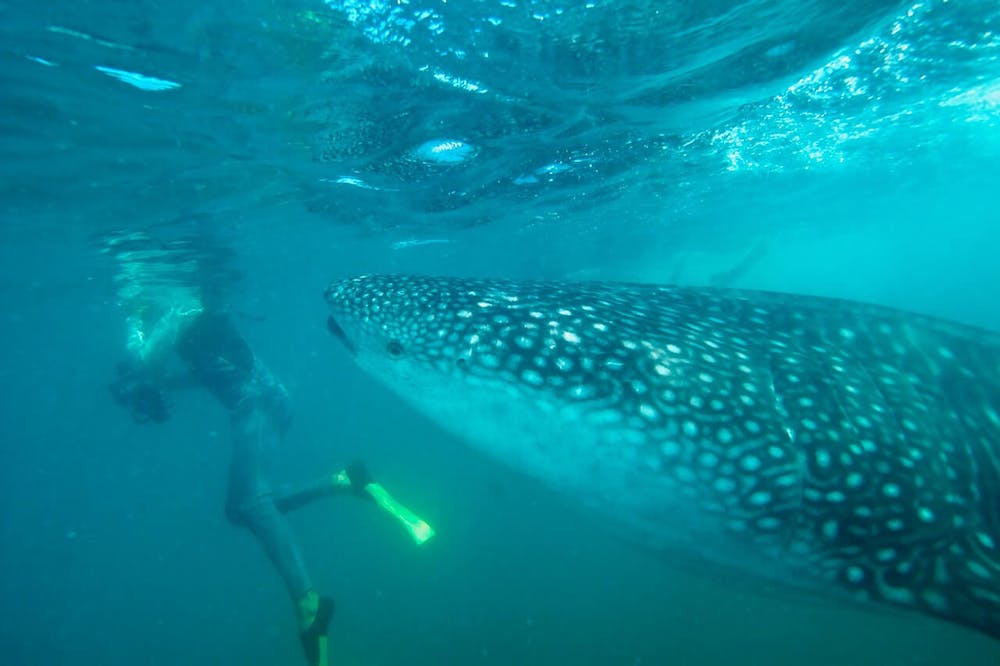 The whale shark is a huge fish—as big as a whale. In fact, it’s the biggest fish in the world and the biggest shark. A really big shark doesn’t sound like a safe swimming companion! But whale sharks are gentle giants. Their feeding strategy is what makes them different than other sharks; they are not predators.

Rather than hunt and kill prey, whale sharks feed like baleen whales, sucking plankton out of the water. They won’t chase another animal or a human.

Until the late 20th century, few people had ever seen a whale shark. The famous marine biologist Jacques Cousteau only saw three of these beautiful spotted fish in his lifetime! Science has since learned something about their travels and where whale sharks go to feed. That’s lucky for the curious traveler seeking a unique and life-changing experience—swimming with whale sharks.

Sharks get a bad rap.

Sharks worldwide are in danger of extinction. Fishermen take them in excess, and on land, many humans love to hate them. Think: “Shark Week” on TV and thrillers in the theaters.

The movie Jaws scared millions of people worldwide, but the author of the book, Peter Benchley, deeply regretted the fear and misunderstanding spawned by his story.  He later spoke out against the unnecessary culling of sharks. He advocated for such an important predator in ocean ecosystems and spent the rest of his life working for marine conservation.

The fact that whale sharks are the largest of all sharks leads many people to believe (incorrectly) that they must be extra dangerous!

4 other shark species that aren’t dangerous

The unpredictable great white shark is not an animal you want to swim alongside. With speed and strength, this determined predator can easily catch any prey it sets its sights on.

But there are many other species of sharks that prepared and experienced people can swim with!

Whale sharks are suckers, not biters.

Whale sharks are the most benign of all sharks. As mentioned above, that’s because of their feeding strategy and adaptations. They don’t need weapons because they filter microscopic and extremely small prey. And they don’t chew their food; they slurp a soup made up of:

Whale sharks have a serene presence, chugging along at the surface of the water at about three miles per hour, slow but steady. The top water is where the sunshine is, and where the sun shines, the plants grow—not just seaweed, but the invisible blooms of plant plankton that turn sunlight into sugar. The itty bitty animals like krill make a hearty broth.

Greenish phytoplankton (microscopic plants) bloom around the southern tip of Baja California Sur. That means soup’s on for whales and whale sharks!

Whale sharks have much more to fear from humans than you do from them. Humans are the top predators on the sea. The whale shark’s big size, relatively slow swimming speed, and need to feed at the surface makes the animal easy prey for fishermen. In today’s overfished world, the whale shark is now an endangered species.

But humans are also curious and capable of awe. We can respect the 450 million years of evolution invested in 1 whale shark.

Safety for you and the whale shark you’re watching or swimming with calls for good manners and good sense.

Finally, not a rule, but an opportunity: Send your photo to the Wildbook for Whale Sharks photo-identification library at www.whaleshark.org. You could be a part of the movement to save these elegant, gentle giants!

Because of their easy nature and soupy diet, whale sharks won’t attack a human being. They just move steadily forward, following the blooms of plankton as they search for their next meal.